The first time I went to Holy Island, I went as a tourist. I was there for about four hours, most of which time I spent dodging the giant crowds of fellow tourists–folks with dogs, folks with kids, folks with dogs and kids–an infestation if I ever saw one. Then we were off, beating the tide…because we still had to drive to our Travelodge outside of York, with a stop at Whitby in between. Needless to say, this fly-by-night schedule afforded little opportunity to really see the place, especially since the place was fairly well obscured by the people crawling all over it. 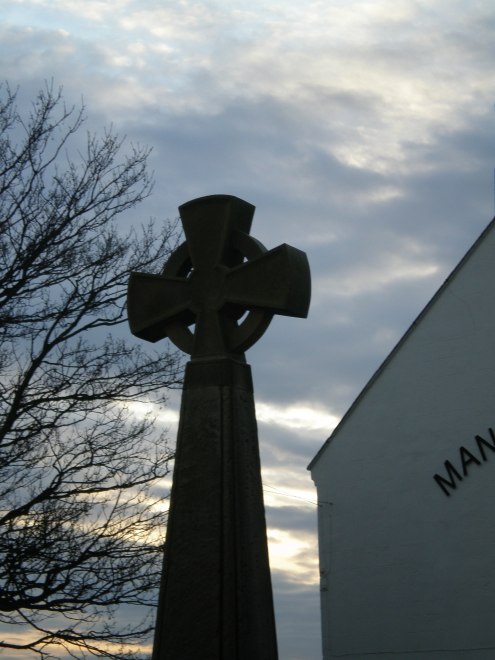 The Holy Island market cross, complete with Celtic wheel design. Some say this is a holdover from pagan times, symbolizing solar worship; others, that it is symbolic of Christ, the “sun” of God, hanging on the cross.

The second time, I went as a researcher, fresh from the reading room at the NLS in Edinburgh. This time we stayed for a full week, leading up to Christmas. I was there to gather information for my Master’s thesis. Several years before, while working as a youth minister in rural Missouri, I had stumbled across the Venerable Bede and his saints. Like so many others before and after me, I fell in love. I became convinced that these ancient Christians, the “Celtic Christians,” with their standing crosses and illuminated Gospels, were the key to everything superficial about 21st-century religion, an impression I carried with me right into graduate studies, onto a British Airways jet, and across the causeway to Lindisfarne. I came in search of answers; I came in search of Aidan, Cuthbert, and their band of medieval holy men. And I found them…in a manner of speaking. 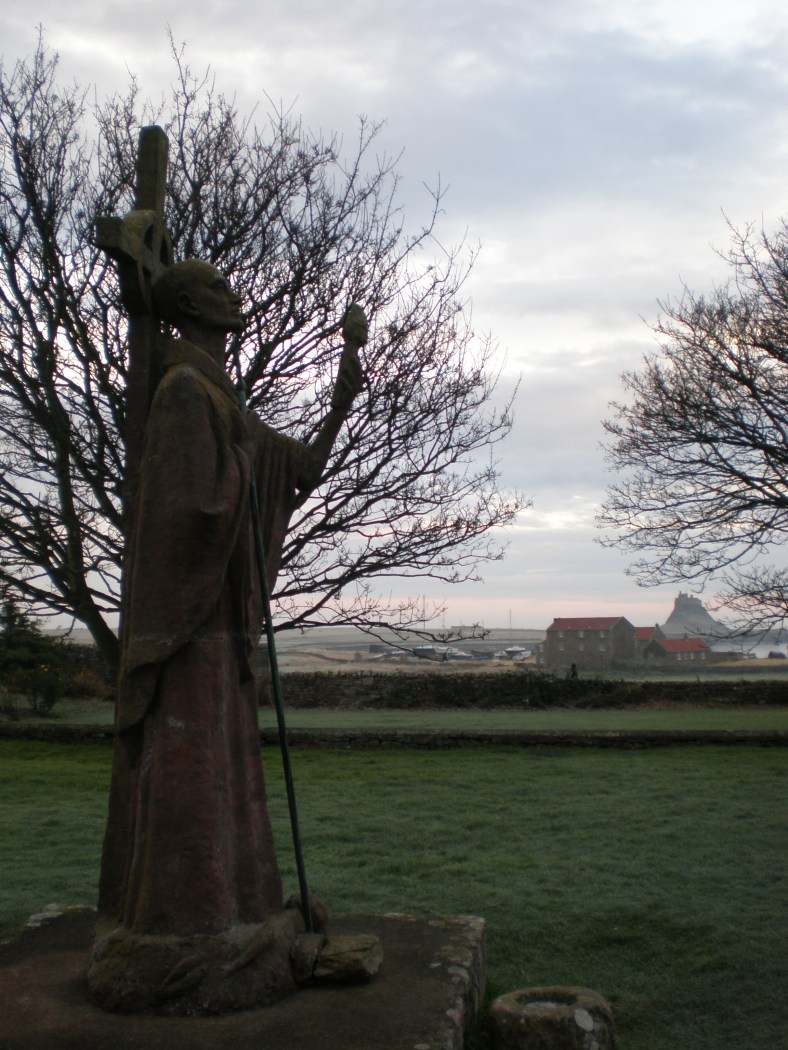 St. Aidan, founder of the Lindisfarne community in 635, stands outside the priory ruins. 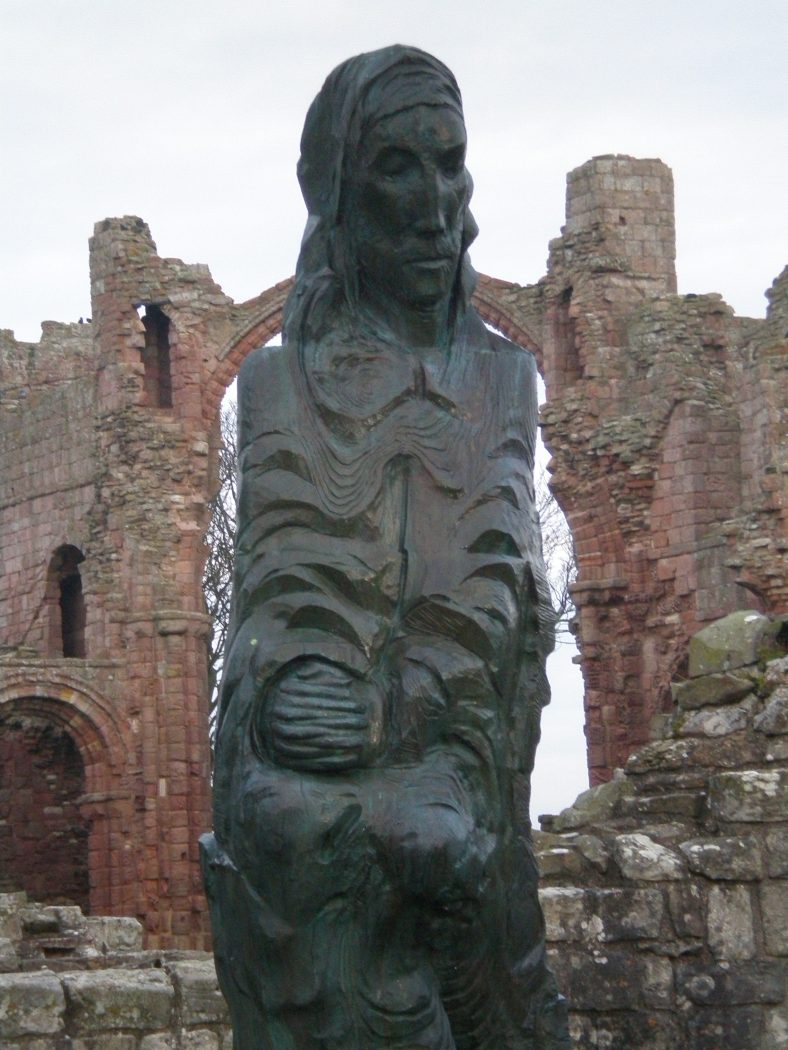 Cuthbert of the Farnes. This sculpture of the saint in prayer stands within the priory walls. It conveys a sense of spiritual agony that is difficult to describe from a distance, as if the statue itself were in pain…

Given the total absence from the island of any vestige of the tourist trade–even the shops lining Marygate were closed against the winter months–we (well, I, anyway; Tammy was overcome by the cold) rambled about the place in solitary fashion. On the original visit, I hadn’t had the time to explore the priory ruins. This time I did so at my leisure, and completely by my lonesome. Throughout the hour I spent knocking around the structure’s reddish-tan remains, not another soul crossed my path (at least not one visible to the eye). There is an air of liminality about the place; whether that is inherent in the locale or is experienced due to conditioning–a sort of spiritual backward masking, if you will–I leave to the judgments of more impartial observers. For my part, I believe in friendly ghosts…

Solid as they must be, dating as they do from the 12th century, the delicate stonework and soaring archways impart to the walls an air of fragility, as if they might tumble away if looked at too forcefully… 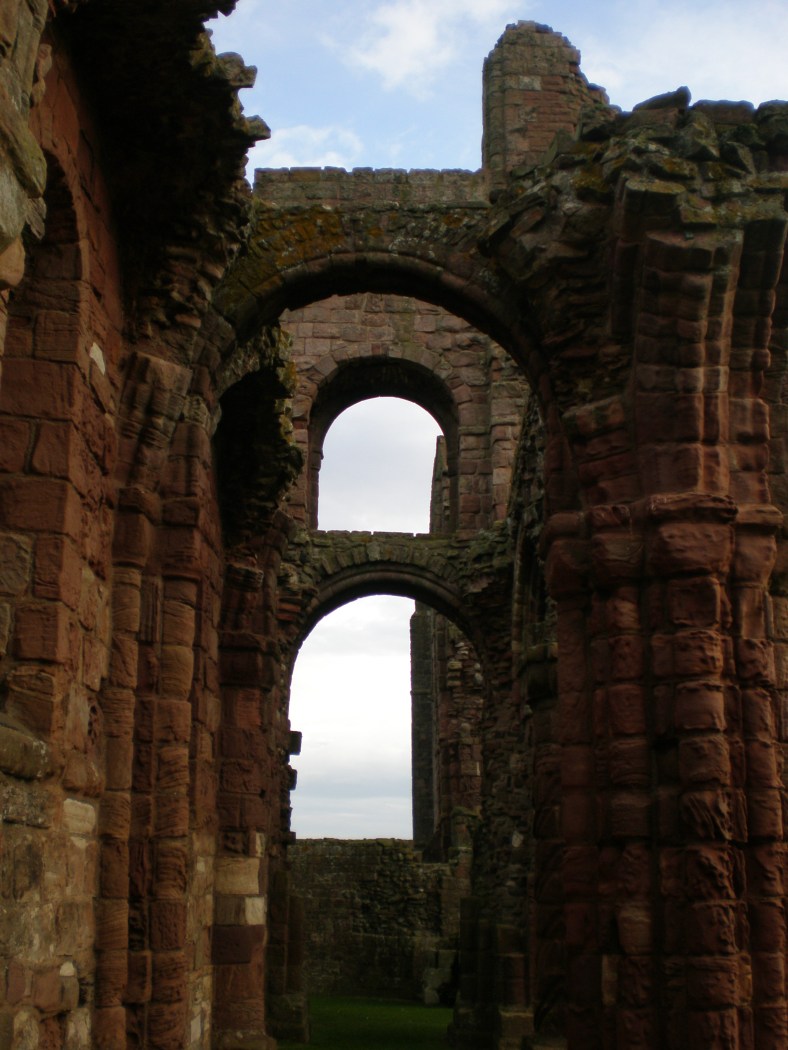 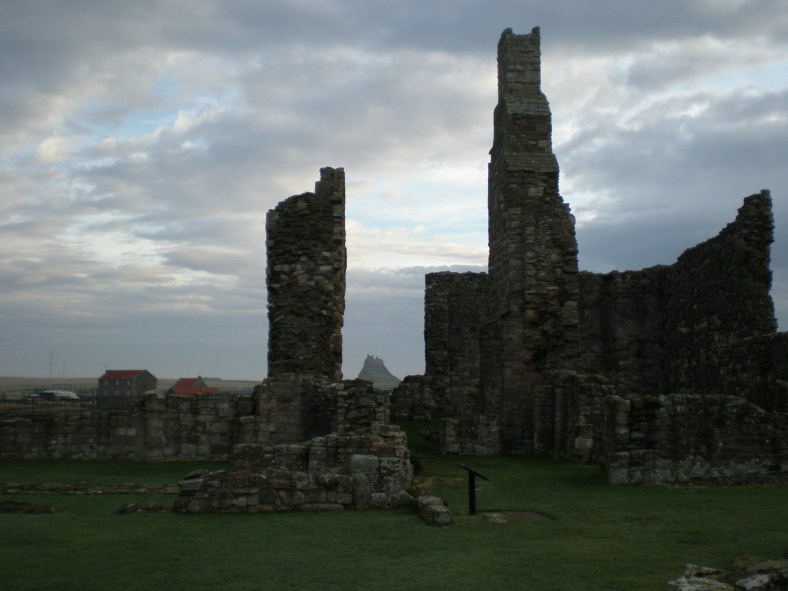 Through a gap in the ruins, Lindisfarne Castle beckons. After it fell prey to Henry VIII’s Great Dissolution in the 16th century, stones from the priory were taken by his soldiers and used in the castle’s construction.

Another of my favorite quotes, this one concerning the spiritual history of the island, comes from a BBC documentary series entitled Memorable Leaders in Christian History. In the episode on Aidan, Andy Raine, a member of the Northumbria Community, described the spot as soaked in the devotion of the early saints: through them, the seeker is offered “a blank check of…prayers that have already been prayed that are waiting to be cashed in on.” 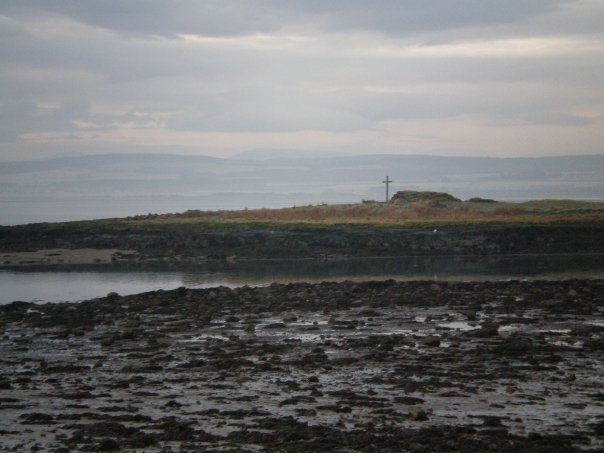 A memorial cross stands on Cuthbert’s Isle, a small island separated from Lindisfarne by some 60 to 70 yards of water. According to legend, the saint for which it is named would withdraw here (and beyond, to the one of the smaller Farnes farther out into the sea) to indulge his hermit’s nature and commune with his God.

I leave you with this blessing from Alexander Carmichael’s Carmina Gadelica:

Until we meet again…