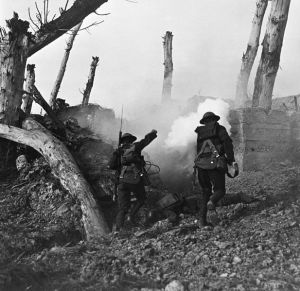 One of the perqs of working as a cataloger is the fact that a good portion of the library’s incoming materials crosses my desk at some point in its journey from box to shelf. Two years ago, I intercepted a book about the development of the British and Irish novel between 1880 and 1940, and as I worked it over, I discovered a wonderfully abundant bibliography at the end of the book that listed every novel discussed within its pages. As anyone who knows me even in passing can tell you (probably with a sigh), I am a bit obsessed with anything having to do with the British Isles, so I rushed down to the office photocopier and ran myself a copy. And then I started working my way through it, A to Z.

On my second outing, I hit paydirt. Which brings me to the third installment of the Big List, featuring Richard Aldington’s Death of a Hero (1929). [Sidenote: Up until fairly recently, this book was out of print, hard to find, and hard on the pocketbook. However, it has just this year been released as a Penguin Classic, which you can order here for a mere $12.00.]

The 1920s were a compelling time in British literary history, as the people of the Isles struggled to come to terms with the horrors of the Great War and the swift kick to the shins it doled out to progressivist thinkers. An entire generation of men had disappeared without a trace, mowed down in the trenches of Flanders and other points along the Western Front. The inevitable tendency of human history toward the good no longer held up to social scrutiny. Into this pregnant pause stepped Aldington and others like him, men who had braved the French fields and made it home alive…and who were all too conscious of those others who did not. They were angry; they were disillusioned; they longed to give the finger to the “Dulce et Decorum” crowd and tell them they could all go to hell on a one-way train. And nobody did it better than Aldington, through his (anti-)hero George Winterbourne. So much so, that the first edition of the book was heavily censored. (Rather than bow to the demands of his publishers, Aldington insisted that the book be published with bracketed ellipses in place of the redacted text.)

Death of a Hero follows the ill-fated ramblings of young Winterbourne from his infancy onward, chronicling the sociocultural machine that oversaw his development and, ultimately, hung him out to dry. In the process, the novelist brilliantly deconstructs (and then redefines) the heroic ideal that had in turn-of-the-century Britain become synonymous with the idea of patriotism, to the point that the one was assumed to dictate the other. As the War on Terror continues to rear its ugly head around the world, spawning greater and greater conflicts even in its resolution, Aldington’s observations have become timely once again.

I leave you with one of my favorite passages from the book:

“George, though he didn’t realise it then, wasn’t going to be a bit of any damned Empire’s backbone, still less part of its kicked backside. He didn’t mind going to hell, and disgracing himself and his parents and his House and The School, if only he could go to Hell in his own way. That’s what they couldn’t stand—the obstinate passive refusal to accept their prejudices, to conform to their minor-gentry, kicked-backside-of-the-Empire code. They worried him, they bullied him, they frightened him with cock-and-bull yarns about Smut and noses dropping off; but they didn’t get him. I wish he hadn’t been worried and bullied to death by those two women. I wish he hadn’t stood up to that machine-gun just one week before the Torture ended. After he had fought the swine (i.e. the British ones) so gallantly for so many years. If only he had hung on a little longer, and come back, and done what he wanted to do! He could have done it, he could have “got there”; and then even “The School” would have fawned on him. Bloody fool! Couldn’t he see that we have only one duty—to hang on, and smash the swine?”

There is murder in me,
Planting seeds of nefarious deeds
Committed in my head. I’ve
Killed you; you’re
Dead…

At least, that’s
What the voices said.