Recently, I mentioned to a friend an experience from long, long ago that I hadn’t really thought about in years. Imagine my surprise, then, when while sifting through old family photos I stumbled across this: 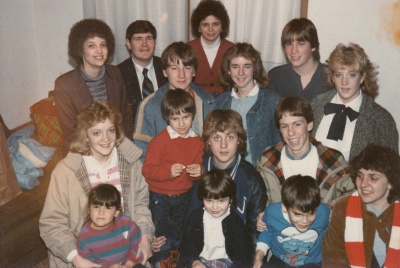 If you’re wondering, I’m the little guy at the bottom right wearing the giant Smurf…

In 1985, two displaced Romanian families came to Marshfield, Missouri, having defected from the Soviet bloc. At the time, my dad (the guy in the back row with the stripey tie) was minister of music and youth at First Baptist Marshfield. All the teenagers you see crammed into the picture were members of his youth group. Scattered throughout are the Borza family–mother Maria in the back center, son Audie in the second row, and daughter Diana beside me and my Smurf.

That Christmas (which is when this photo was taken), First Baptist decided to pull together gifts and supplies for the newly arrived families, to help them feel more connected to our community. And I had an idea: I raided my toybox. There was this Transformers car (or Go-Bots–I don’t remember which), a little blue convertible number, that I absolutely loved, and I seized on that as the perfect gift. I don’t remember if Mom wrapped it or not; I just remember the feeling of happiness that came with handing it over to my new friend. Strong enough that today, almost thirty years after the fact, it’s still clear as a bell in my mind.

I don’t say all this to toot my own horn. I was eight years old in 1985, just a kid, and I did what came naturally. The older I get, the harder it seems to be to make such sacrifices, even ones as small as giving up a favorite toy. (If there is, by the way, a moral to this story, perhaps that is it: as we grow out of our childish openness and generosity, it becomes more and more important to rediscover those qualities on a regular basis. We spend so much time teaching children to share, a lesson quickly forgotten by the jaded adults we’re all on our way to becoming.)

As I said, this story is not about boasting, but about making connections between myself and my past. None of what I’m about to say was at all clear to me at the time. Little of great significance to our lives and identities ever really is. There’s a reason they say what they say about hindsight. As I think back over all those unobtrusive, apparently inconsequential moments in my history; as I’m reminded of fleeting memories through sharing them with others; as I begin to exegete my own experiences–only then does an image come into focus and begin to solidify before me. Things begin to make a sense I didn’t ever realize they had.

“The world is full of so many lonely souls.” That moment of connection with the Borza boy was an eight-year-old’s first inkling of the truth of that statement. At the time, I didn’t know from communism or dictatorship or political repression. It would be years before I could formulate a decent definition of the Soviet Union, and by the time I could it didn’t even exist anymore. But here was this kid, not so different from me, a kid who enjoyed Christmas presents and little toy cars every bit as much as I did. A kid who, given other circumstances, might have been me, and I him. And for the briefest of spaces, our lives intertwined, became one. And I learned, albeit unconsciously. As I told my friend upon relating the story, I couldn’t even remember the family’s name, not until I read it off the back of the photo. Couldn’t remember the year. Just the faces. And the feeling. Of connection. Of camaraderie. Of compassion.

Those are feelings I’m trying desperately to cling to as I travel farther and farther away from that eight-year-old’s perspective, a perspective both limited and startlingly limitless. I struggle to remind myself that the line between myself and “the other guy” is so tenuous as to be nonexistent. I seek to feel and understand the pain that might so easily be mine, as one hopeful that others care about the pain that so often is. Mine. And yours. Ours.

Because in that understanding resides my humanity. Without it, I exist, but alone, not as part of anything. And I feel a burning need to be part of something, something that matters, something that changes…something.

The world is full of problems to which I want to help find solutions. That Christmas I began to figure that out. Here was a family who couldn’t have a holiday because they’d had to run away from home. That’s probably about as far as my comprehension took me, back then. But it was enough. I knew what running away from home meant; I knew that I didn’t want to do it; and I knew that I didn’t want anyone else to have do it, either. And while I didn’t realize it at the time, my little plastic toy represented my best effort to help normalize their world, to allow them to feel at home again. To give them a home again.

And while they didn’t know it, as I reached out to them, they reached out to me and taught me one of the most important lessons I think we can ever learn: not that giving is better than receiving, but that in a very real sense, giving is receiving. And what did I receive from them? The greatest gift of all:

The first glimmers of an awareness of love–what it is and how to do it. True, love can be expressed through grand gestures, but more often it inhabits the little things. Love is in the approach. Love is forged in the fires of similarity and given form by the iciness of difference: I love you because you are like me, and because I could so easily be in your shoes.

They taught me to begin to love you. And I do. All of you. Even you crazy spammers filling up my inbox everyday with odd phrases that are rarely in good English and therefore always amusing. I love each and every one of you. If I could, I’d give you all a giant hug and invite you in for a cup of coffee or a beer or iced tea or whatever–pick your poison.

The Borzas taught me to begin caring. And I still do…

When the heart beats, the heart bleeds–
It has no other choice.
In the midst of unmet need it cries
To find a silent voice.

Darkest night, that of the soul
Hollowed out in pain:
Knowing only emptiness,
The deepest, blackest stain.

A pleading going all unheard,
A single, oft-repeated word,
A crippled, hunted, flightless bird inside.
Something has died.

This has been a heavy week, for several reasons, and I’ve had a hard time with that writer’s-block-y thing. So, I leave you with proof (albeit grudging) that every once in a while, a library cataloger’s job can be pretty cool.

Straight from the White House–through the Library of Congress–through the personal library of Ramon F. Adams–to my desk… 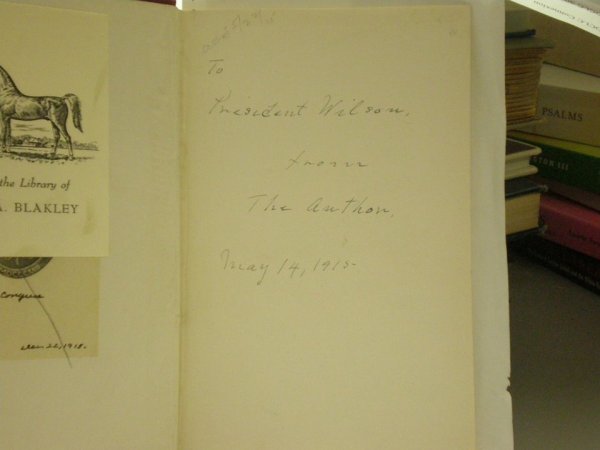 How far we fall to
Reach
The summit…

Summoning thoughts
Of bruises prior, the pain of all those
Passing hours, payments made
Against regret. A debt the growth of which
Is staggering; a nagging sense of
Nothing
Lasting ever longer and longer. Were I
But stronger, I might reach out and
Grasp the edge, flex whatever inner muscle,
Atrophied, huddles dormant deep within; stretch the sinews
Once again; bend the will, tame the spirit.

Above, silhouette
Traced in sunlight, eyes alight
With fire and passion, second sight–
Looking toward the future past. At last
We meet,
Myself and I. Another lunge, another
Try!

And then…Surprise!
My face looks back with other eyes;
My fingers on another’s hand.
And there we stand, united, one–
You will not fall; I am not done. We
Climb together (On belay!) beyond the
Laws of physics, beyond the pull
Of isolation. Crazed striations, granite lifelines
Set in stone, a map to somewhere yet
Unknown. Say the word:
You will be heard.

How far we fall to
Reach
The summit
And into one another
Plummet.

I was recently encouraged to explore my experiences growing up in Argentina, since by my own admission that is the place where I feel “I truly began.” Whatever that means, But then, I guess that’s the point, isn’t it?

Anyway, I’m reposting this as a good starting place for my story. The best beginning is often at the end, and here, on the cusp of my adult life, I began truly to contemplate all the people, places, and adventures that led to those final moments of childhood. I began, in short, to search for who I was, am, and will one day, hopefully, grow to be…

Life is
A four-letter word…

Freedom of speech is easy to
Preach,
Harder to learn.
The world turns on turn of phrase:
Rhetorical flourish, meaning malnourished,
Pundits ablaze with long-distance courage.
And somewhere inside, where
Sincerity hides, the heart opens wide,
Screaming in silence, and
Truth
Breathes its last, its moment
Long past.