The day is upon us.

Super Tuesday: the day on which we all get to decide whether it’s more important to win, or whether–perhaps–there is more to our voting choices than that.

At the end of the day, this election isn’t about ideology, it isn’t about conservative versus liberal. This one’s about basic human decency, about respect for one another and our political process. This one says something, profound and revelatory, about us as a nation and a people.

I’m not endorsing one party over another here. There are Republican candidates who have a lot to offer (well, candidate, anyway: Kasich–although I’ll take Rubio in a pinch). There are Democratic candidates who also promise at least some level of progress, and who have talked, not about the “evil Other,” but about the good we can do together as citizens of the United States.

And then there is the One.

The guy whose whole platform is built on putting down pretty much everyone, who has all but endorsed whatever form of torture serves him most conveniently, who has refused to distance himself from the KKK (with which historically inconspicuous organization he claims to be unfamiliar), and who has bullied his way through a series of debates without ever actually talking about anything, really, at all.

The guy whose plan is having one.

I’ve heard of several conservatives who, given a Trump nomination, are planning to abstain. Fine. But you could vote now, instead; vote, thoughtfully, for a more thoughtful option. Which is pretty much ANYBODY ELSE.

To my fellow Democrats, same goes for you: winning isn’t everything. In fact, in some cases, it isn’t anything. “Electability” is for the cynical and cowardly. Our problem, politically speaking, is that we’re not willing to swing for the fences. Everything is “strategery”: how do we get our guy (or gal) in, and then, how do we keep them there?

And we wonder why nothing ever changes.

We have one candidate who has told us what could be accomplished if we try, and we have another who has told us, consistently, that so little can be done that trying is a waste of time. Yoda is great, but I don’t really want him in the White House. Progressivism (real progressivism) is all about the “try.” Anything else is stagnation. And we’re all too familiar with that.

Let’s be clear: Hillary tells us that the root of “progressive” is “progress.” Fair enough. The root of “socialism” is “social.” And that has nothing to do with the Soviet Union, or Karl Marx, or bread lines and sovkhozy.

It’s not about the state at all, really. It’s about how we look at each other, about who our neighbors are, about what kind of neighbors we intend to be. The true socialist society is a reflection of its people. That the USSR got it backwards doesn’t mean it can never work. It just means that it hasn’t worked yet.

So, stop fearing the labels and catchphrases, and listen to what Bernie has to say about the things that are holding us back as a nation. Which is ourselves.

Every generation needs a “moonshot.” But that means embracing the big ideas, remembering that the moon is out there in the first place, waiting to be shot at.

Democrats, let’s vote for the candidate who’s willing to shoot for the moon.

For the love of Pete, don’t vote for the guy who might accidentally blow it up.

…it is a tale
Told by an idiot, full of sound and fury,
Signifying nothing.

Rubio: (scratching head): But, sir, might I inquire as to what your plan entails? You say, ‘Smite the enemy,’ and yet you offer no strategy, no line of attack.

Rump: What, sir, is my plan? What is my plan, you ask? My plan. (Stares in defiant confusion)

Rump: My plan, sir, is simply this: good. It is the best plan. And it will succeed, sir, because it will. Doubt me not, sir: I cannot tell a lie, because I do not know the difference, sir! I challenge you, sir, to dispute with me!

Rubio: (pointing) But what are the details, sir, of your plan? How exactly do you propose we proceed?

Rump: The details of my plan, sir, are as follows: it will succeed, because it is good. Please, sir, desist from this odious repetition of words! My plan, sir, is good. It is good. My plan is good, sir! It is, I daresay, great. The greatest. My plan is the greatest plan in the history of talking about plans, sir!

Rubio: (still scratching head) Might I also inquire, sir, as to who the enemy is, sir?

Rump: It is simple, sir! The enemy is the bad people. Unless, at the time in question, they are the good people. In which case they’re our friends. Indubitably, some of the best friends I’ve had. Great advice, all of them; great advice! The best advice!

Cruz: (Looks up from the fire, where he is roasting a machine gun) Would anyone care for a morsel of bacon?

Rubio: Do not change me, Nanny! I will not be changed!

Rubio and Rump are hoisted from view. Their words turn to undefined wails, and slowly fade away. Cruz sits in the corner, chewing reflectively.

Momma says stupid is as stupid does.

I would very much like to say that I’m surprised at yet another Trump victory in Nevada yesterday. I would like that so much.

Nothing we ‘Muricans do surprises me anymore. Horrifies, yes; angers, most definitely; renders apoplectic, indubitably. But surprise went out the window with the Double Down and the wiener-stuffed crust.

So, I’m announcing my candidacy: Toad for President, 2032.

Sure, it’s a little in advance. And I’m a virtual unknown. But it gives me 16 years to hone my xenophobic, nationalistic, ugly American rhetoric. Plenty of time! By then, I should be a perfectly acceptable horrible excuse for a human being. I’m a shoe-in!

Because if Donald Trump can become President of the United States, any old jackass can…

High hopes were once formed of democracy; but democracy means simply the bludgeoning of the people by the people for the people.

There are thoughtful voters on all sides of the political aisle: Democrat, Republican, conservative, liberal, and independent. The problem is that those thoughtful folks are trapped between two (much louder) extremes:

On the one hand are the corporations. You know, those people. Money talks. Loudly. And, when money is up for grabs, your average politician’s its mouthpiece.

On the other hand are the clueless. Let me be clear: I ascribe this label to no particular ideological category. They stand both to the left and the right of center. These are the people whose vote is decided before candidates even begin their campaigns, before they even know who will be running. Who say things like “Voting for a ___ is unthinkable.”

This kind of cocksure attitude speaks at a dull roar. In my experience, anyone who says something is “unthinkable” really hasn’t thought about it at all. In this scenario, a vote isn’t a decision; it’s a reflex. And blind certainty is the birthplace of volume. Generally speaking, the more someone yells, the more he thinks he knows, and the more a person thinks he knows, the less he really does.

So, we’re stuck between dollars and nonsense, and like John Kasich and Martin O’Malley, we find it hard to get a word in. The deck of democracy is stacked against us.

It’s hard not to feel that, in the midst of so much sound and fury, we really do signify nothing…

If you need a little encouragement after Saturday…

Happy Monday and here’s to a new week. Yes, the Nevada results stung on Saturday. But it’s a testament to how far we’ve come that we are disappointed we didn’t come out on top in a state we were given absolutely no chance of winning a few short weeks ago  – and one whose popular vote Obama lost by 8 points in 2008.

After Nevada, the score stands at 1-1-1 and we are tied with Clinton in the pledged delegate count at 51 each (the superdelegate issue is a whole separate story). That’s 51 each, with a total of 2,032 delegates necessary to win the nomination. There are 47 states to go. Clearly, we are in the very early days of what is the ultimate long game: an American presidential nomination.

State by state, stitch by stitch, Bernie is weaving a new progressive coalition in…

For the love of George Washington’s ever-lovin’ ghost,
don’t give the rest of the world yet another reason
to think we’re all a bunch of grinning idiots.

A nice summation, I think…

I have heard his opponent say that he is a one issue candidate….I disagree….his foreign policy leaves me a bit dry….but he is spot on when it comes to what this society needs……

I have also heard that Bernie has NO idea how to pay for the proposals that he has offered……in case you would like to know……. 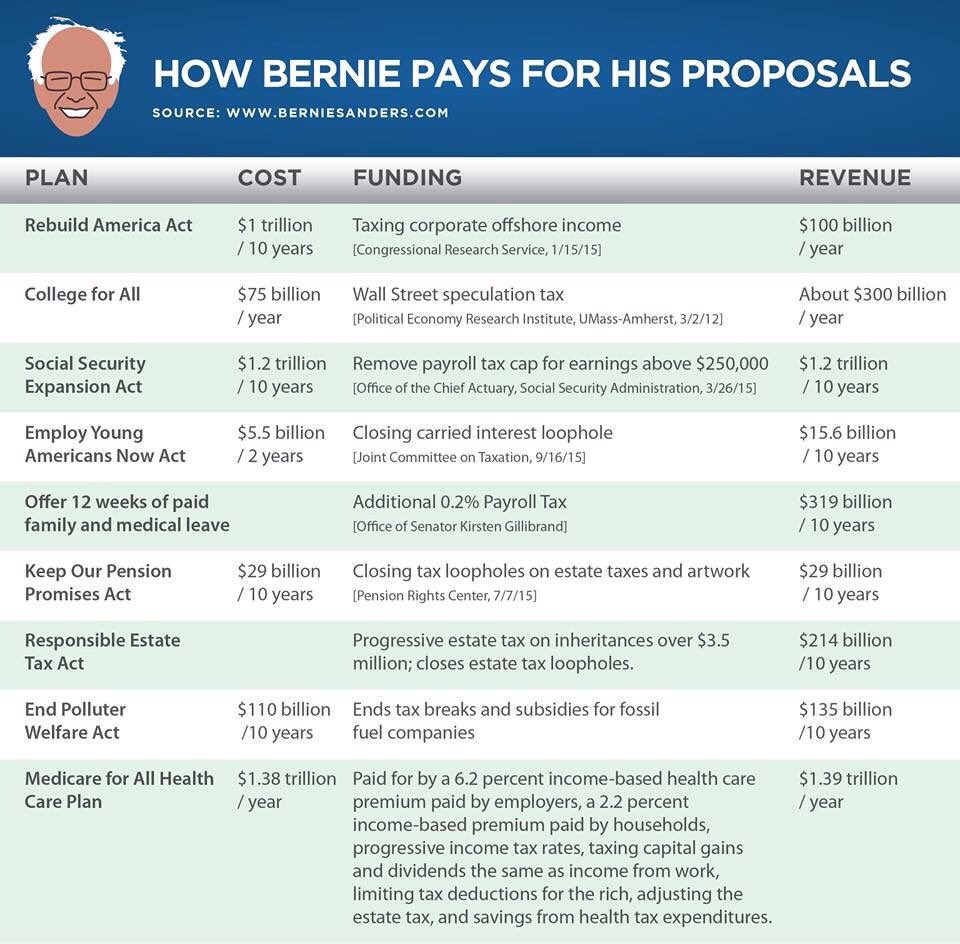