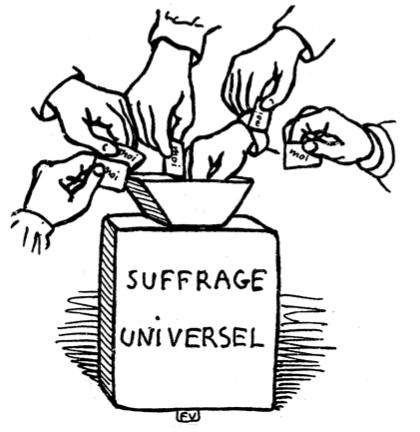 The day is upon us.

Super Tuesday: the day on which we all get to decide whether it’s more important to win, or whether–perhaps–there is more to our voting choices than that.

At the end of the day, this election isn’t about ideology, it isn’t about conservative versus liberal. This one’s about basic human decency, about respect for one another and our political process. This one says something, profound and revelatory, about us as a nation and a people.

I’m not endorsing one party over another here. There are Republican candidates who have a lot to offer (well, candidate, anyway: Kasich–although I’ll take Rubio in a pinch). There are Democratic candidates who also promise at least some level of progress, and who have talked, not about the “evil Other,” but about the good we can do together as citizens of the United States.

And then there is the One.

The guy whose whole platform is built on putting down pretty much everyone, who has all but endorsed whatever form of torture serves him most conveniently, who has refused to distance himself from the KKK (with which historically inconspicuous organization he claims to be unfamiliar), and who has bullied his way through a series of debates without ever actually talking about anything, really, at all.

The guy whose plan is having one.

I’ve heard of several conservatives who, given a Trump nomination, are planning to abstain. Fine. But you could vote now, instead; vote, thoughtfully, for a more thoughtful option. Which is pretty much ANYBODY ELSE.

To my fellow Democrats, same goes for you: winning isn’t everything. In fact, in some cases, it isn’t anything. “Electability” is for the cynical and cowardly. Our problem, politically speaking, is that we’re not willing to swing for the fences. Everything is “strategery”: how do we get our guy (or gal) in, and then, how do we keep them there?

And we wonder why nothing ever changes.

We have one candidate who has told us what could be accomplished if we try, and we have another who has told us, consistently, that so little can be done that trying is a waste of time. Yoda is great, but I don’t really want him in the White House. Progressivism (real progressivism) is all about the “try.” Anything else is stagnation. And we’re all too familiar with that.

Let’s be clear: Hillary tells us that the root of “progressive” is “progress.” Fair enough. The root of “socialism” is “social.” And that has nothing to do with the Soviet Union, or Karl Marx, or bread lines and sovkhozy.

It’s not about the state at all, really. It’s about how we look at each other, about who our neighbors are, about what kind of neighbors we intend to be. The true socialist society is a reflection of its people. That the USSR got it backwards doesn’t mean it can never work. It just means that it hasn’t worked yet.

So, stop fearing the labels and catchphrases, and listen to what Bernie has to say about the things that are holding us back as a nation. Which is ourselves.

Every generation needs a “moonshot.” But that means embracing the big ideas, remembering that the moon is out there in the first place, waiting to be shot at.

Democrats, let’s vote for the candidate who’s willing to shoot for the moon.

For the love of Pete, don’t vote for the guy who might accidentally blow it up.