Post hoc ergo propter hoc. After it, therefore because of it.

Welcome to Apocalypse Logic 101. No matter what happens, we’re always one day closer than we were before. To what, we don’t know…but chronologically speaking, how can you argue with that?

I will display wonders in the sky and on the earth, blood, fire and columns of smoke. The sun will be turned into darkness and the moon into blood before the great and awesome day of the LORD comes…

Then take the title of John Hagee’s blood moon book: 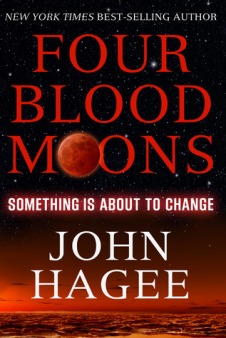 The key to end times predictions is never saying anything that can’t be walked back or redefined when the predicted event fails to materialize. “Something is about to change.” Let’s not specify: that way, whatever happens, that was it.

All Christian eschatological prophecies are based on biblical passages which were themselves purposefully vague. The intent of the OT prophets was to encourage in the long term, not to schedule a dinner party for next week. So, it is a relatively simple undertaking to co-opt their “predictions” and set a date without risking too much loss of face in the event of failure. Add to this a decent dose of “no one knows the day or the hour,” and it becomes a never-ending game of “pin the tail on the Doomsday.”

These things, says the prophet Joel, will happen “before the Day of the Lord.” Says Hagee, the day after nothing happens: No, no; it was a sign, not the sign. It opened a door, proving that at some undetermined point in the future, something will happen.

After it, therefore because of it. Meaning that, whatever significant and/or traumatic world event takes place ever at any point in time after right now, from a flu epidemic in Baltimore to a handshake in the Gaza Strip, is proof that something happened after Hagee said something would.

And since something is bound to happen, well…he must be right.

The trump of God shall sound in the heavens…

raining down chaos and destruction upon us all, and ushering in the end of the world.

Run to the hills
Run for your lives

I know I’ve been on a tear lately, but I wanted to take a brief moment to wish you all a fond farewell. It’s been grand!

But as you all (may) know, the end is nigh. Again.

Tonight, at 9:11 CST (spooky, right?), the fourth in a tetrad of blood moons will unleash upon us the wrath of God’s judgment. Or so I’m told by John Hagee. And a bunch of other experts no one’s ever heard of before.

Or this little book, which in its day was quite the bestseller, and now stands as a tribute to

humankind in all our gullible glory? And don’t get me started on the Mayans! How could they do that to John Cusack’s career!?!?

But this time, I assure you, it’s real. I mean, it has to be, right? How else could these folks give us yet another feeble guess with anything approaching a straight face? No, this time…well, I don’t think I’d be remiss in recommending a collective kissing of our asses goodbye.

Tomorrow, if any of us has survived to wander the post-apocalyptic wasteland, feel free to join me here in Waco, and we will feast together on radioactive fish from Lake Waco. (Really, we could do that anyway; everybody knows the fish in Lake Waco are quite possibly radioactive already.)

Duck and cover, my snuggle-bunnies! It’s gonna be a bumpy ride…