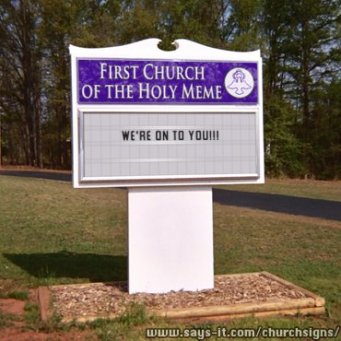 If you have nothing nice to say,
then don’t say anything at all.

So…I just got back from a conference in Pasadena, CA, at which I presented a paper on social media, and the ways in which they affect our ability to engage one another in meaningful dialogue. One of the topics I discussed, by chance, was the Internet meme. The presentation went rather well, I think, and I was going to write a follow-up post for my bloggy thingy here. And then, I got a forward from my father-in-law, well-meaning spreader of whatever rumor floats his way on the wings of cyberspace, fact-check free:

Dearborn, Michigan–out to kill us all!!!!! Except…wait a minute…that sign looks a whole lot like this one: 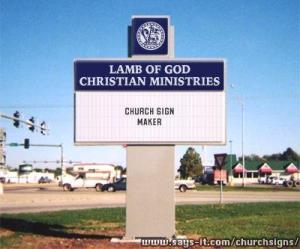 Exactly like it, in fact! Could it be that someone completely fabricated the “Kill America!” message, and then spread it, knowingly and maliciously, around the Internet as if it were the truth, the whole truth, and…well, you get the idea? Unheard of, right? Who would do such a thing?

After five seconds of research and a very helpful Snopes.com page, followed by a moment of righteous indignation at the intellectual and moral dishonesty of the person who did this…I remembered something. Something I’d seen on the blog of a friend who, supposedly, has taken it upon herself to expose the lies told to the masses by organized religion:

And that looks a hell of a lot like this:

Before my father-in-law’s forward, I had no idea that “Church Sign Maker” even existed. And, having spent a few years in the church sign business myself, I’ve seen my share of ridiculous messages in front of church buildings. So, I bit. Hard. I even laughed at some that I saw on fellow bloggers’ pages…like this one:

Which, once again, looks a whole lot like this: 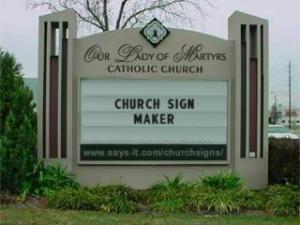 Now, I know that these last two images are not exactly the same (the one above has a larger foreground, etc.), but they are obviously images of the same sign. And that’s the point: who knows which one, if either, is real? That’s what the meme does, people. It bends the truth, even when based on a partial truth, to the point that it’s no longer distinguishable from the lie.

Now, I should have known, me and my tirades about memes and what they do to our ability to relate to one another. But, you see, I trust the person on whose page I saw these things. Trusted, anyway. Now, how am I supposed to know what is real, what is true, in her ongoing crusade against religious “untruth”? My father always told me: Two wrongs do not make a right. What of that? In fighting a lie, is it acceptable to use a lie?

Because, at the end of the day, that’s what these things are: lies. Inventions. Like the “Dearborn sign,” and equally harmful. We can use memes to put our words into the mouths of anyone we want, anyone we don’t like, in a way that creates an illusion of truth and makes them responsible to the masses for something they never even said. And it cuts every which way. Welcome to the world of digital propaganda! We don’t need to discover evidence and expose the truth. We can simply create the truth out of whole cloth.

So, next time you try and tell me, my friend, that Christians are the problem, that they’re the ones obstructing productive dialogue, spreading a harmful false message and preying upon the gullibility of the masses, check yourself.